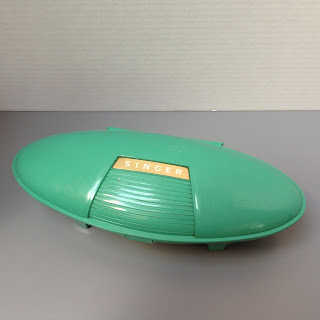 You've seen those cool "Jetson's" style button hole attachments, in the awesome atomic era case.  But does it fit your sewing machine?

First we will talk about Singers, then broaden the field a bit!  The earliest Singer buttonholer didn't come with templates, it came with wing nuts and was adjustable in different directions.  This blog has pictures of the different button hole attachments. Then came the buttonholers with metal templates, 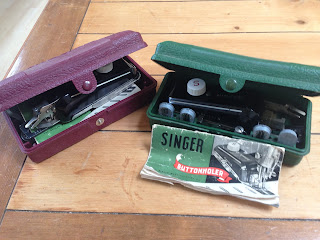 this is also when Singer began color coding the cases, burgundy for the slant shank, green for the straight (vertical) needle machines.  They followed it along with the 1960s buttonholer, the pink is for slant shanks, and the turquoise is for straight.  I know, you have a straight needle machine but like the pink??  Me too.  But then I got a slant shank machine so now I have an excuse to have the pink.

But often when folks are selling sewing stuff they don't know anything about it.  If it looks like a sewing thing it gets stuck in a drawer or in a bag at a thrift store - there is no guarantee that it is in the right box, or that even if it came with your machine that it goes with that machine.

For the earlier Singer ones the part number is on the bottom, so you can match it up, with a source like the blog I linked above.  But the ones in the cool Jetsons case don't have the Singer part number on them!  And the instruction book is for both models.  But I found out something cool the other day, look at the top of the metal part that attaches to your needlebar: 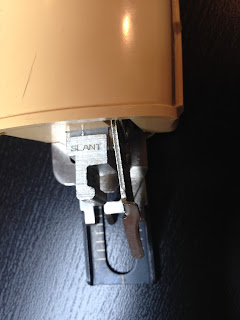 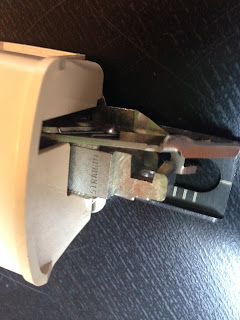 It says Straight or Slant! So you can be sure you get the one to match your machine.

In the late 60s and on into the 70's Singer made the Professional buttonholer, which many people swear by.  I have one, but haven't tried it out yet.  It often come with Touch n Sew machines but apparently can be used on early ones like my Slantomatic.

What if I don't have a Singer?
Don't worry, the Greist company made buttonholers for all sorts of different machines.  You do have to hope they are in the right box, because the model is stamped on the end of the box.  Here are the pictures of two of the box bottoms listing the models. 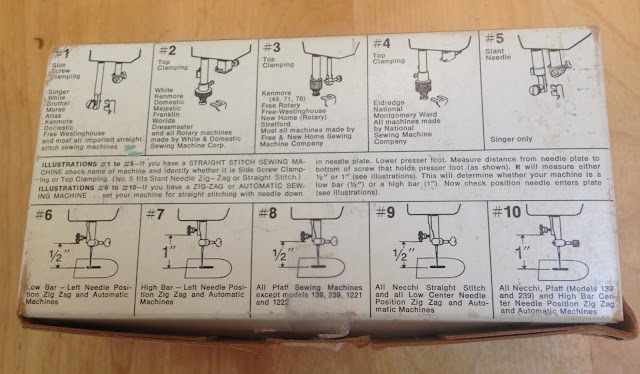 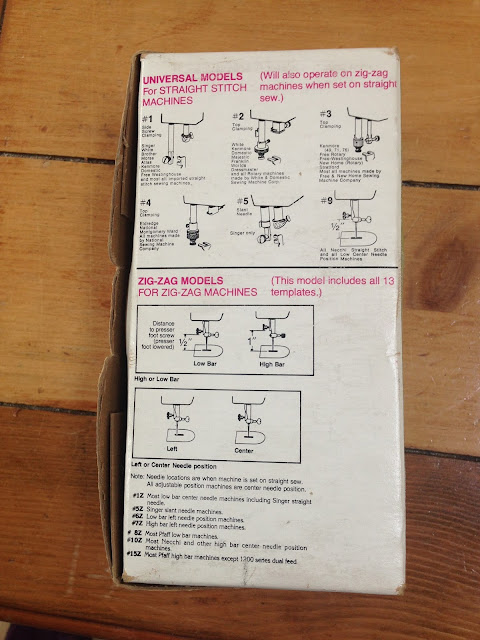 As you can see they cover most of the vintage machines out there, up until the button hole stitch started being built into the machines.

Aren't sure what type of shank you have, here's a good guide.  And for more info, I always turn to ISMACS, http://ismacs.net/singer_sewing_machine_company/singer_buttonhole_attachments.html

Do you have a favorite buttonholer?


Posted by FreshwaterFibers at 1:46 PM 3 comments:

Gearing up for Etsy sales

Okay the sewing room is a cluttered mess, and I really have to get serious about getting rid of some stuff!  I have a few machines I need to sell, including a Singer 404 that is all cleaned up and ready to go.  And although I have been listing some things on eBay for awhile, I am polishing up my Etsy shop and working on stocking it with lots of vintage goodies.

First I got my daughter, the talented graphics designer one, to make me a custom look -- I gave her free reign, and she came up with the greatest idea: she made my new shop name look like the name plate on a vintage sewing machine!  Check it out:

And here is a sample of her work https://www.etsy.com/shop/JenMiniDesign

Do you have an Etsy shop, or sell on eBay?  Or what do you do when the vintage goodies start crowding your space to actually, well,  Sew?

Posted by FreshwaterFibers at 3:17 PM No comments: