My Mother's Day machine, a White 626, a Japanese made zig zag machine.

On Mother's Day last year, I was enjoying a cup of coffee, and cruising Craigslist for sewing machines.  I often start with our local list, which usually has only a few recent Singers, and a few overpriced antiques.  But there was a White sewing machine, in a cabinet, for only $25, in my town.

A quick phone call, and my husband and I were off to find the house in a rural area near us.  He was chuckling as we went on our adventure, as I have drug him off in the past to rescue a loom from a barn, and another time we rented a van to bring home a loom from a nearby city.  Now that I am not weaving, but focused on sewing, I think he enjoys finding and helping me fix the machines as much as he did the looms.

And here is what we found: 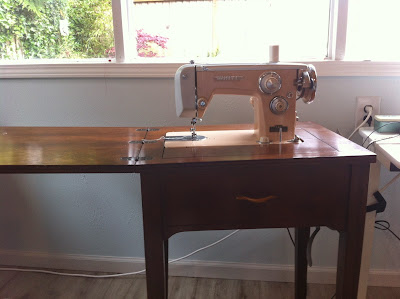 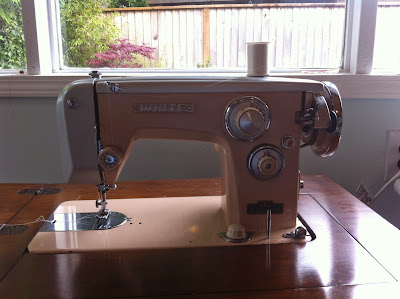 It's a White 626, in a lovely peach and silver two tone.  This is one of the machines made post world war II, still all metal, made in Japan. After the war many factories started producing sewing machines, and they are widely believed to be great workhorse machines.

Google wasn't very helpful with info on this machine, there is a video demonstrating it on youtube by niftythriftygirl, and she states that it is the first one she's seen.  I did find someone else on a yahoo group who had one, but that's about it.  Not very common.

I did get a manual at the Singer site, http://www.singerco.com/support/instruction-manuals  The trick with White machines is that you put a W in front of the model number, so w626 yielded a manual.  Not that it was strictly necessary, the function is straight forward and the same as the machines I learned to sew on in the 60s and 70s.

The woman I purchased this from said it was her mom's, and was purchased in 1962.  She remembers the year because her mom also bought her a sewing machine at the same time as a wedding present.  She is keeping hers, but doesn't need two machines as her mom is no longer with us.  The only problem she ever had with it was a broken belt, but she was able to buy a replacement at the local fabric store.

It's an easy machine to find stuff for, takes a 15 class bobbin, low shank accessories (which means it shares with my Singers) and a standard 15 x 1 needle.  I'm not enamored of the 60s style standard cabinet 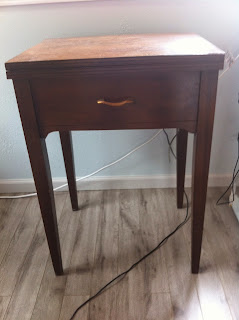 but I do like that it is in a cabinet, makes it so easy to use.  It has a knee lever, which I learned on so that doesn't bother me.  The machine was a bit dirty, and I had to fiddle with the tension a bit.

It has a left needle position, so when it is straight stitching it sits to the left of the feed dogs, this makes it tough to piece a quilt with 1/4 seam allowances.  But if you wanted to quilt with it, the feed dogs drop all the way, or part way so you could do free motion quilting or darning. 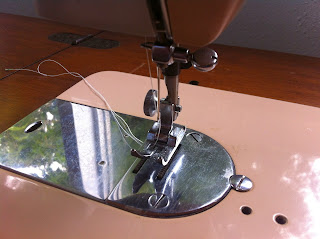 I haven't really played with that, so far I have enjoyed it for regular project sewing, a little dress, some table runners, things that are handy to have the zig zag as well as the straight stitch.  I have a modern machine with these capabilities, but this is much more intuitive to use than remembering to push the right buttons and listen to the beep noises.  And the cabinet is much more comfortable than the dining room table. 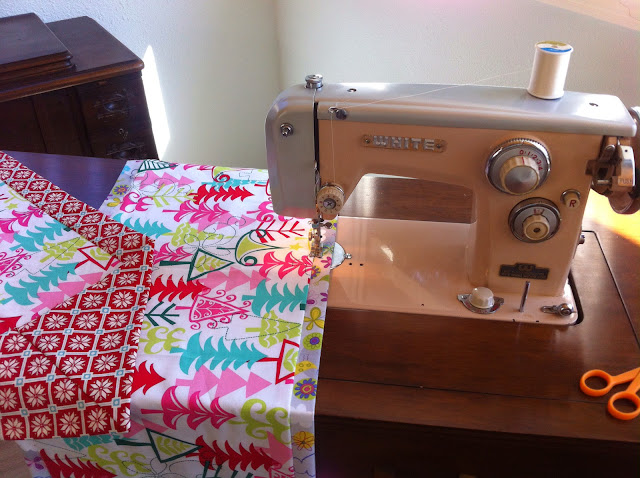 I would thoroughly recommend a machine of this era for someone looking to do general sewing, making projects for home and family.  They are around, in many styles and colors.  Often for a great price as they aren't as collectible as the antique machines, and things like Singer Featherweights.  This blogger has some great advice on finding a Japanese machine
http://dragonpoodle.blogspot.com/2012/10/are-you-looking-for-one-good-vintage.html

When you bring one home, also grab some baby wipes and some good sewing machine oil. Wipe down the machine, open up the bobbin area and clean out lint and thread bits, and oil according to the manual.  Chances are you will be ready to sew.

Remember my husband from our trip to pick it up?  He hasn't used this but is very attached to this machine, when I have talked about getting rid of a few machines he always says we have to keep this one.

My mom had a White, I bought it from the daughter of the original owner, and on Mother's Day.

Next Wednesday, a couple of 3/4 sized machines.
Posted by FreshwaterFibers at 11:49 AM