When my nana passed away I asked for her sewing machine and matching cabinet. It was a Singer, but I don't even know what model, it was gold or bronze and used cams in the top to make fancy stitches. I used it for awhile, then along came children, several interstate moves and at least 20 years without any sewing projects.  When I finally returned to sewing, thanks to a few weddings where our girls needed dresses, I bought a new machine, then another newer electronic one.

For years I talked about taking nana's old Singer to a sewing machine repair shop and getting it tuned up and using it again. But I never got around to it, and when it came time to move again I (gasp) donated it.

In a very short time I felt guilty, and even looked around town a bit to see if I could find it again with no success. About a year later my fancy electronic machine broke, and after an expensive repair job I was informed that it was only a "light duty" machine. This concept was foreign to me, as I grew up sewing whatever heavy or light projects I wanted on the mid-century machines just like everyone in my suburban neighborhood had. So I started reading about vintage sewing machines with the vague idea of looking for one.

Not much later I saw an interesting trapezoid case in the back corner of an antique/junk mall. 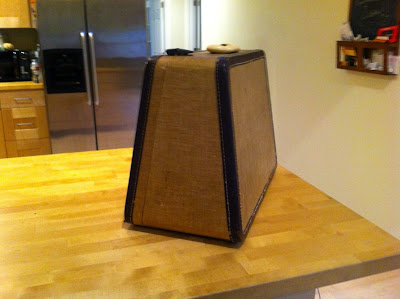 Inside was a tan Singer sewing machine! Not quite the same as nana's, but similar enough to make me think it might be the new heavy duty machine that I needed. The guys at the counter were so excited someone was buying it, they both started reminiscing about family members and telling me how wonderful old machines are. They insisted on plugging it in and showing me it ran, and the light worked.

I got it home, and found out I now owned a Singer 306w, it had a manual and one cam. It had the typical fabric and pins on the arm, which I thought was quaint until I later learned that this set up causes "pin rash", scratching the machine under the fabric with all those sharp pointed pins. 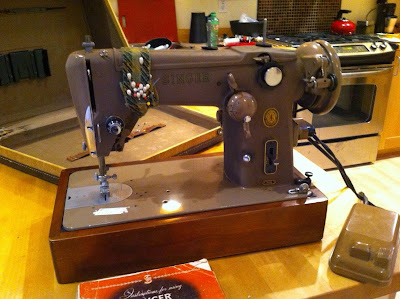 It was kind of terrifying that the guys had plugged it in and turned on the light, since the insulation on the wiring to the light was crumbling and falling off, exposing bare wire.  The first thing I did was take the light off and hand it off to be re-wired.  My handy husband eventually did get it done, but it was tricky and involved the purchase of snap ring pliers to get the fixture open.

Here are a couple of blog posts about this machine
http://possumjimandelizabeth.com/xhtml/collect_sewing_sing306.html
Just below the top picture is a tan one like mine. Lots of good info if you have or are looking at one of these.

This blogger isn't so fond of this machine
http://sewing-machines.blogspot.com/2009/08/singer-that-should-be-forgotten.html

And the manual can be downloaded from Singer here 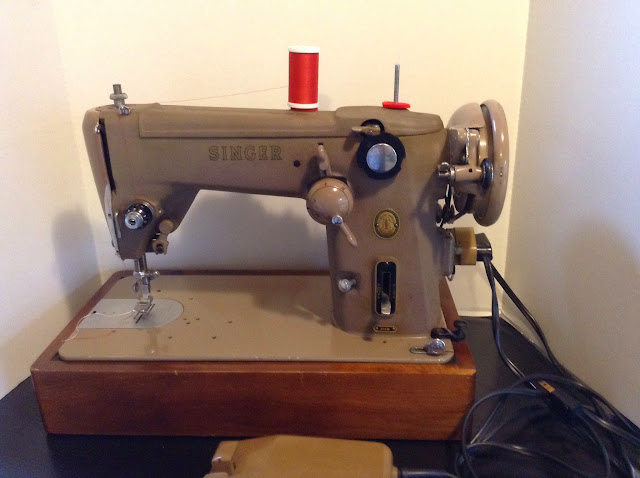 This photo is from when I put it up for sale.  I had fun with cleaning it up and making it purr, but eventually decided it wasn't the machine for me.  It was easy enough to buy the correct needles and bobbin online, so the fact that they weren't common wasn't that big of a deal.  But the thing is heavy, and without a cabinet for it to live in, hefting it onto the dining room table to sew was a challenge.  I didn't much care for tipping it back to change the bobbin, although I didn't find that a horrid idea as I tip machines back to oil them regularly.

A nice couple made a day trip to pick up the machine, she was happy to get a machine to hem her husband's jeans and work pants on.  He was surprised old machines were around and still working.  If he only knew...

Future blog posts will describe what machines came next...and hopefully some things I have learned about cleaning etc. that you might find helpful when you find yours at a yard sale!


Posted by FreshwaterFibers at 12:14 PM